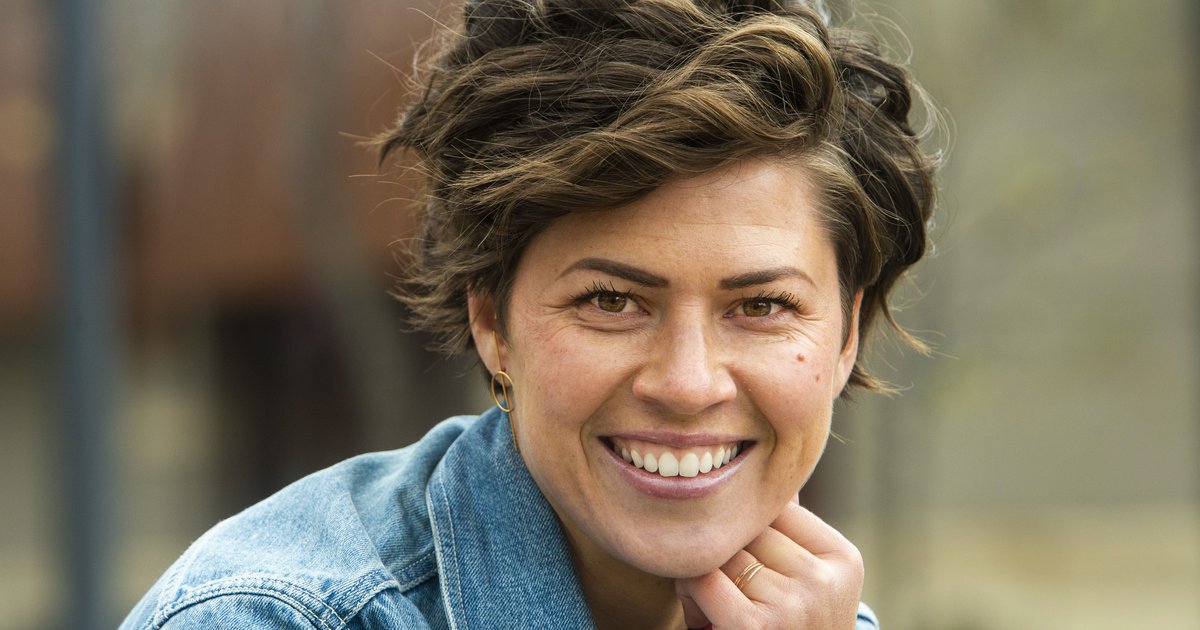 When Kyl Myers emailed the birth announcement for the baby she and her husband, Brent Courtney, brought into the world in March 2016, she included the usual information — weight, length, time of birth — for little Zoomer Coyote Courtney-Myers.

She also wrote this: “We have decided that instead of assigning a gender to Zoomer we want to go the gender creative route. We want Zoomer to experience all types of things and be able to explore and play with gender.” The new parents would refer to Zoomer with gender-neutral pronouns, they and them — or sometimes just “Z.”

Myers knew she would have to explain the decision to relatives, friends and future child care workers. “The curse of gender creative parenting is you have to talk about it so much more in the beginning,” Myers said in an interview this week from her home in Salt Lake City.

Myers writes about that parenting decision and its implications in a new book, “Raising Them: Our Adventure in Gender Creative Parenting” (Topple Books/Little A, 229 pages, hardcover, $24.95). Myers will take part in a virtual conversation about the book — moderated by activist/artist Pidgeon Pagonis, co-founder of the Intersex Justice Project — Wednesday at 7 p.m., on the Facebook page for Weller Book Works.

The publisher approached Myers about a book, she said, and suggested she tell her story as a memoir because it “will probably resonate more than me, as a sociologist, just dumping statistics onto the page.”

Myers had been writing about gender creative parenting before Zoomer was born — both in a blog, raisingzoomer.com, and on a now-idle Instagram account, @raisingzoomer.

The book also begins before Zoomer’s birth. “It made sense to talk about my upbringing in the Mormon Church, in a really binary, gendered culture,” she said. Born in Oregon, her family later moved to southern Utah, where many of her relatives still live; her father, Karlin Myers, is a judge in the Justice Court in Hurricane.

Myers also writes about her college years, where she became passionate about gender studies and also started asking questions about her gender identity. Today, Myers identifies as genderqueer, using both she/her and they/them pronouns. She also writes about meeting Courtney, an easygoing Australian who has been a solid partner in gender creative parenting.

Her family, and Courtney’s family, have been “like this perfect jackpot of a family, who’s like, ‘We don’t get it, but we love you. So we’re on board.’” Myers also thinks she “had been laying the groundwork for my family for a really long time” during her years earning her degree in gender studies and working as a sociologist.

“They respected me as a social scientist who studies this and could talk to them about the data and the science, and show them the historical, political, economic and health disparities,” Myers said.

The book is partly a how-to guide for other parents considering the gender creative decision, through the experience of a family who was doing it.

Myers wrote the book, she said, “so that people could understand, if they wanted to do it right, what kinds of things they would encounter,” Myers said. “The hospital. Talking to your family. Preschool. Extracurricular activities. How do you shop for a kid? How do you know what language to use for a kid? What kind of interactions are you going to have with strangers?”

When she was pregnant with Zoomer, Myers said, she was usually asked one question: “Are you having a boy or a girl?”

“People are so fascinated with pregnant bodies, and tiny infant newborns,” Myers said. “I think people feel like it’s one of the only questions they can ask about a baby, or a preverbal kid.”

After a while, as Zoomer got older, people didn’t ask as much. “They just look at your kid on the playground and make an assumption, based on their hairstyle or the color of clothes that they’re wearing,” Myers said.

The book also covers what happened when Zoomer’s upbringing became the topic of international speculation. Myers agreed in 2018 to be included in an article in New York magazine, in which writer Alex Morris interviewed several families engaged in gender creative parenting. New York put the headline “It’s a Theyby!” on the article.

Though other parents were quoted, it was Myers’ words, cribbed from Morris’ article, and pictures plucked from her Instagram account that were published by other outlets around the world. The British tabloids — using screamer headlines such as “Why This Mum and Dad Won’t Tell Anyone if Their ‘Theyby’ Toddler Is a Girl or a Boy” — spread the story far and wide.

“I was so naive,” Myers says now. “I didn’t realize the rules, or the non-ethics of media.”

Some of the comments were supportive, but many more were cruel and painful. She was surprised by those who wrote such things as, “How dare you put your child’s entire life on the internet?”

“We don’t have a 24/7 webcam,” Myers said. “I think I wrote 18 blog posts over the course of a few years. … I don’t want people to think that our life is so rosy and perfect, but I give enough information that they feel like we’re being authentic about it.”

Myers suspended the Instagram account in September 2019, in part to respect Zoomer’s autonomy. “I wanted to give them some digital breathing room,” Myers said. She also did it for herself. “It felt like my whole online identity is wrapped up in being a parent. I have more in me than that,” she said.

The media firestorm passed, and Myers said she learned from it. “I have a tougher skin, and feel a lot more resilient to it now,” she said. “I could kind of care less if people write about us or talk about us now.”

Myers may have enough material for a follow-up book soon, because of two big changes in the family since she finished writing “Raising Them” last year.

One is that the family is moving to Australia later this month, for at least a few months, to get reacquainted with Courtney’s side of the family and to ride out the coronavirus pandemic.

The other big change is that Zoomer, now 4 1/2 and preparing to start kindergarten, has decided on a gender identity.

Myers won’t say publicly, yet, what Zoomer has decided for themself. “I’m in the process of figuring out how to talk about it,” she said.

Myers said she expected Zoomer to make a choice sooner or later, particularly as they went to preschool and became more social.

“I think all kids’ gender identities are a combination of who they uniquely are, but also their environment and their peers, and their families,” Myers said. “Because we’re human, and we start out, ‘Who am I like? What kind of labels do other people use?’”

In some ways, Myers said, Zoomer’s decision lifts a burden from their shoulders. “We don’t have to have that conversation anymore,” she said. “When someone’s like, ‘Do you have a boy or a girl?’, we don’t have to do the elevator speech anymore.”

On the other hand, though, “now people are just going to start assuming stereotypical ways about our kid,” she said, adding that “[where it was] more like, ‘Let’s give Zoomer the space to explore gender,’ now it’s like, ‘Please don’t stereotype my kid. Please don’t only use half the adjectives, and only offer them up half the toys.’”

Myers doesn’t expect she’ll stop talking about gender creative parenting. “My advocacy has always been beyond just Zoomer. It’s institutional,” she said. “That will just level up in elementary school, because there’s going to be so many more policies to tackle, to make sure they’re inclusive. And not [just] on behalf of Zoomer, but on behalf of any and all kids that go to that school.”

Myers expects the conversation will get easier, because “the gender creative parenting movement will become less fringe. … There’s so many more families who are stepping into the advocacy spotlight. I feel like when Zoomer is a teenager, people aren’t going to be like, ‘You’re Zoomer — you’re the kid who was raised bizarre.’ I think everyone’s going to know of a family who did something like this.”

What might Zoomer’s memoir say, 20 years from now? “My hope is that they’re not mad at us for doing it,” Myers said, laughing. “I hope they grow up to think that we gave them the tools to really help push the gender revolution forward, and that it aligns with their values and beliefs around gender.”

‘Raising Them’
A memoir about gender creative parenting, written by Kyl Myers, a sociologist raised and educated in Utah. Published by Topple Books/Little A (an imprint of Amazon), 229 pages, hardcover, $24.95.
Virtual conversation • Weller Book Works is presenting an online discussion with Myers and activist/artist Pidgeon Pagonis, co-founder of the Intersex Justice Project. The discussion will be Wednesday at 7 p.m. on Weller’s Facebook page, facebook.com/WellerBookWorks.