The Rise and Rise of ‘Voice Note Dating’ 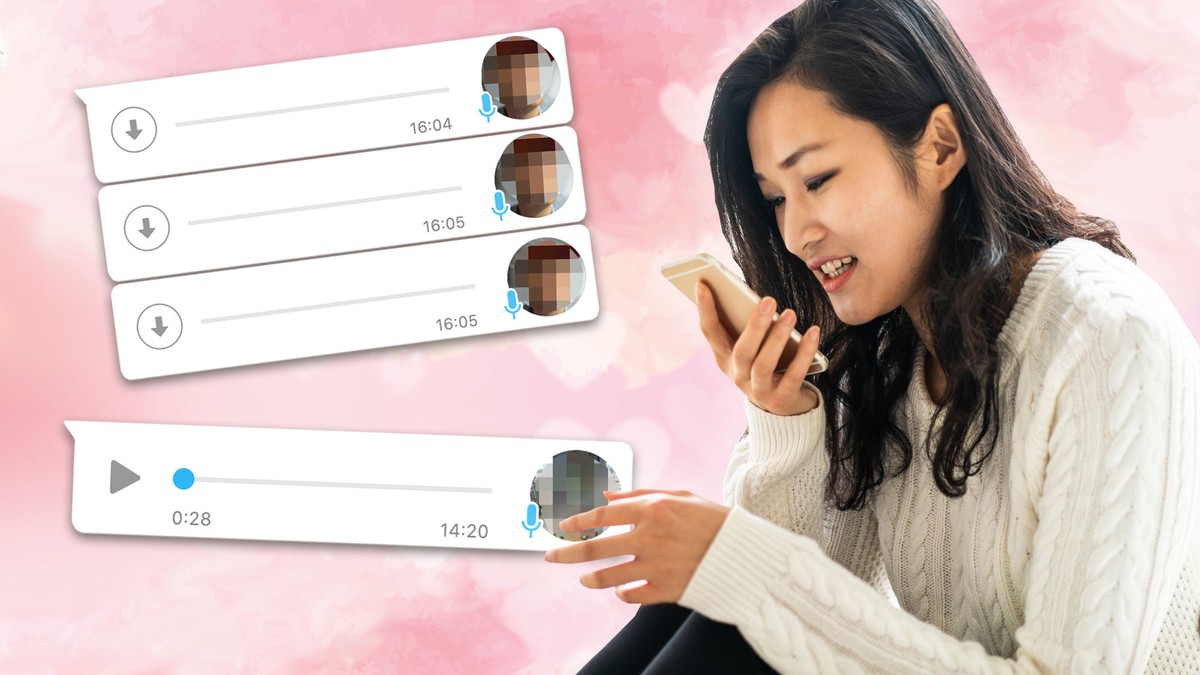 When James met Millie in a bar on a university trip to Budapest last Easter, he immediately felt a spark. She was funny, beautiful and had good chat. But the geography student was unsure how feasible starting a relationship was, given that he would be graduating soon and moving to London.

James messaged Millie anyway, and they spoke on and off for a month before summer began. As someone who “hates endless texting”, he decided to send her a voice note on WhatsApp just before he boarded a plane to Brazil to go travelling.

When Millie replied with an even longer voice note, James was pleased. He now credits voice notes with keeping the spark they had alive over summer.

“They let you get a glimpse into someone’s thoughts and how they tick,” James says. “You feel much more connected to the person and it brings that person to life a bit more – it is definitely more intimate than other forms of communication.”

One year on James and Millie are in a happy relationship. They are also part of a growing number of people who enjoy sending voice notes when dating. In the past year, Bumble, Happn and Hinge have all added a voice note feature to their apps. Earlier this month, a new dating site called String launched with the tagline “date with your voice”. Singles sign up to communicate with others using only voice notes.

“Voice note dating is one stage up from communicating by text message, but one stage down from being brave enough to actually have a conversation face-to-face or on the phone,” says relationships psychologist Emma Kenny. “It allows you to take the relationship to a different level and feel more intimate without any more bravery.”

Kenny adds that in today’s “time short” society, some people find that they can get more from a 30-second voice note than a block of text.

“It is a good way to get to know someone if you are busy but lazy,” agrees Klaudia, 23, who met the guy she is currently seeing on String. “I’m busy in the sense that I have a lot going on, but I’m lazy in the sense that I don’t want to text. The voice-noting works for me because I use my voice, rather than thinking about texting and typing.”

Phone conversations can be awkward, Klaudia adds, but voice notes are a quick way to find out whether you have chemistry with someone. “I was attracted to [the guy I’m seeing] and I was really attracted to his voice,” she says.

Kenny thinks that gaining a better understanding of someone’s tone and humour before meeting can offer better insight into the kind of relationship you may have, too. “Anything that can reduce that anticipatory anxiety, and just make you feel like you know the person a little bit more is going to be helpful,” she says.

“When you then take it to the next level of actually meeting or speaking to each other over video, you’ve already done the difficult bit of building the relationship to the point where you don’t feel as conscious or embarrassed as you may usually feel when we’ve not met somebody yet,” Kenny continues.

A lot of the success of voice note dating hinges on timing and balance, says Nadine* from Nottingham, who found voice-noting guys from Tinder to be an effective way of filtering out those she wasn’t interested in.

But the 28-year-old does say that if she received a lot of voice notes from a Tinder match who she had barely spoken with, then it could be a red flag. “A lot of the time it depends on the vibe,” she explains. “If we didn’t have the right vibe and we had only said hi and they’re sending me voice notes, it is weird – it would feel as if we weren’t there yet.”

However, like Klaudia, Nadine thinks that an attractive voice can make all the difference. “There is definitely such a thing as being attracted to somebody’s voice and the way that they speak,” she says, adding that she is more inclined to meet up with someone if they have voice-noted first.

For many millennials, it seems that voice notes have become an enjoyable middle ground between texting, which can sometimes feel impersonal, and the potential awkwardness of a phone call.

“There is definitely less chance of misunderstanding over voice note,” says James. “When you are texting someone who you like and you overthink it you can take hours crafting out a message or something. Over voice note, you can’t really do that. You just hit the button and speak.”